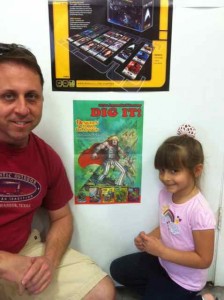 Stephen Newton and daughter in front of DCC poster at Game Kastle in Santa Clara, CA

So this weekend our FLGS, Game Kastle in Santa Clara, held another one of their Flea Markets. They hold these about three times per year and it’s always fun to see all the goodies. At these flea markets, I typically pickup old-school 1ED AD&D material to round out my “nostalgia collection”. At this particular event I picked up a boxed copy of Gygax’s World of Greyhawk game setting (although it was missing one of the big maps, so I got it cheap.) I also picked up a copy of the 3ED’s Forgotten Realms Campaign Setting. The reason: my brother and I have done so much work on writing up the mythology, important NPCs, and geographies for the Princes of Kaimai modules (otherwise known as K1: Haunting of Larvik Island,  the soon to be released K2: Attack of the Frawgs and the still being written K3: “Larvik 2”) that I may actually write some sort of campaign guide for DM’s/judges that want to play as a series.) We have a wiki with all the pertinent info to maintain continuity as we write, so I ‘ll have to see how much work it is to organize for print.

I took this photo of me and my youngest daughter at Game Kastle in front of the cool DCC retro poster that they had hanging there.

But what about Attack of the Frawgs?

Frawgs is close, my friends. The lovely Catherine Harkins has started work on the layout and I’ve been busy proofreading the layout. As I mentioned earlier, we are waiting for DCC RPG to hit the shelves before we release our module–and as we can see here the pre-order books have already shipped! Cat has done a superb job as always and I’m looking forward to everyone getting a chance to read the module. It looks like it’s clocking in at 12 pages (including 1 map page, 1 OGL page and one ToC) so about 7,000 words of adventure goodness! Bring on the frawgs!