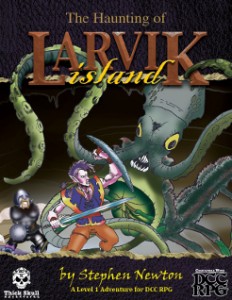 The Haunting of Larvik Island includes a rich history of the island, over a dozen new original monsters, and detailed background notes to help judges bring the adventure alive on game night. The adventure also contains a summary of important locations, NPCs and myths to allow the judge to easily customize the adventure for their own campaign setting if desired. The adventure can be played as a standalone adventure, or as the second in the Princes of Kaimai adventure series along with Attack of the Frawgs.

Also available “Encounter Maps: The Haunting of Larvik Island” – 14 encounter battlemaps that can be used with the adventure. Available as a free download at RPGNow.com.

Early Praise for The Haunting of Larvik Island DCC RPG!

“I’m really impressed by what I have seen. It’s a very meaty adventure, the background story is great and best of all, everything seems to make sense (which is not a given)…. I think the value offered for the price is great… It’s probably the best third party DCC adventure that I’ve read so far and does not have to shy away from being compared with the first party modules….. ”
—Jurgen Mayer

“…The Haunting of Larvik Island provides a rich backstory and history in the adventure and that makes it really great for starting up a new campaign. There are some really creative takes on old school monsters like the goblins and I think you provide a lot more game material and plot hooks than first expected by the adventure. I especially love the squidopede and can’t wait to unleash that guy on the party. :)”
—Thom Hall

“Stephen Newton’s trip to Larvik island is a great treasure hunt – dangerous and wondrous, yet grounded in quasi-realistic aesthetics, this module proved to be a rather awesome surprise for me. There are few modules that attempt to be smart sandboxy and wholly player-driven explorations focused on finding a treasure. At least if you discount “Enter a dungeon, kill everything.” This module actually feels different in its neat execution of the treasure hunt-angle, and its blend of subdued and strange aesthetics hits a neat sweet spot for me. While the lack of bookmarks is a bit of a pity, this is still very much a module I’d recommend, and indeed one I’d consider worthy of conversion beyond DCC if you’re looking for something different, yet not too outré. My final verdict will clock in at 4.5 stars, and due to the excellent map/handout-support, I will round up and bestow my seal of approval on this module. Well done!”

Print Version: Order it online at FRPGames.com or ask for it at your local FLGS. If you’re having problems finding a print copy, drop me an email and I can put you in touch with one of the fine resellers who sell the modules at conventions.