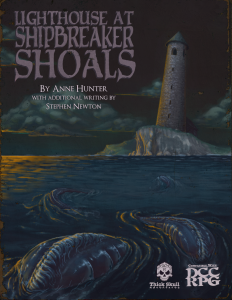 The blazing beacon from the lighthouse at Shipbreaker Shoals used to be visible on every cloudless night. Just above the horizon line, the brightest star in the sky, a sleepless eye, slowly winking on and off as it rotated between Sagewood and the sea. After weeks of fog and rain, last night was clear… and the lighthouse was dark.

The town council of Sagewood meets and decides you must go to the lighthouse and discover what’s gone wrong! There are portents that someone—or something—wanted the light- house extinguished. It is up to you to uncover the mystery and see what has befallen the residents at the lighthouse at Shipbreaker Shoals.

This tasty new adventure can be played standalone or as as bridge sandwiched between Attack of the Frawgs and The Haunting of Larvik Island.

On a cool evening in the town of Los Castores, a lawyer summons a small group of strangers into his office. Obediah Felkner, a prominent resident and claim owner of a nearby quicksilver mine, has recently passed away from a mysterious illness. Surprisingly, a group of complete strangers have been named as his beneficiaries. The claim to Felkner’s mine could become theirs.

However, Felkner’s last will contains a peculiar condition: in order to claim the deed to the mine, the party must collect a holy relic known as the Hand of San Roque and deliver it to Felkner’s grieving widow before dawn. The artifact is rumored to be hidden somewhere in the old Mission San Roque, abandoned by the Spanish almost 40 years ago.

And should they refuse? The lawyer points out they, too, have contracted the same disease that claimed the life of Mr. Felkner, and the retrieval of the relic is their only hope if they wish to survive the mysterious deadly affliction.

The star fell from the heavens far above, its long red tail ripping the sky like a bloody, dripping wound. All eyes of the tribe—mutant, manimal, and plantient alike—were transfixed by the resulting explosion seen far off in the horizon.

Some proclaim this is the Second Death, foretold within the Ancient Prophecy. But one venerable sentient redwood recognizes it as the Sky Ark of the Ancients, whose mysteries must be explored before they can be exploited by the tribe’s enemies. What perils and mysteries will lay within the Sky Ark? Only the heartiest of your species have a chance of surviving the dangers that accompany the arcane ancient technology developed by the Children of the Fallen Sun.

Frightened villagers have come forward saying they’ve seen strange grotesque green creatures peering at them from within the woods. And now, a local trapper has returned from Dead Goblin Lake reporting that he and his partner were savagely attacked by one of these hideous creatures—he barely managed to escape and he fears that his partner may not have been so lucky. The townsfolk feel something must be done, but with no local militia the call is sent out: “Is no one brave enough to take up arms and dispatch these creatures before they kill again?”

Get your game on with some Thick Skull Adventure game-wear!