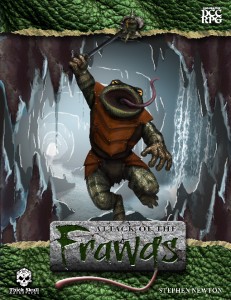 “The thing I love about Stephen Newton’s Attack of the Frawgs is that you think everything’s fine. This is just another adventure. Everything’s cool. Nothing too unusual. Nothing crazy. Good ol’ vanilla fantasy.  But when the frawgs hit the fan… all bets are off. Best “holy shit” reveal I’ve seen for DCC yet.”

Attack of the Frawgs has been updated for 2015. Changes include:

When strange creatures prey on the innocent, the meek must become the hunters!

Panic is mounting in the isolated settlement of Sagewood! Frightened villagers speak in hushed tones of “walking frogs the size of men” peering at them from within the woods. And now, a severely wounded local trapper has barely managed to return from Dead Goblin Lake; the fate of his partner known only to the foul creatures that so savagely attacked them.
In a small village without heroes, the townsfolk look desperately towards each other for salvation from this terror.

Are you brave enough to risk it all?

Attack of the Frawgs! is a Dungeon Crawl Classics Roleplaying Game adventure designed for 8-14 0-level characters but can be easily adapted for 1st-level characters. It can be played standalone or as part of the Princes of Kaimai adventure series published by Thick Skull Adventures along with The Haunting of Larvik Island.

Order Print Version Online: the print version is now available at FRPGames.com and you can typically find it on eBay. If you’re having problems finding a print copy, drop me an email and I can put you in touch with one of the fine resellers who sell the modules at conventions.