Posted by snake on Apr 26, 2014 in Inside the Thick Skull, Uncategorized, Writing | 0 comments

A couple of months back I came across a blog post article by +Brad Morris where he showed off a custom game map he’d designed for his home DCC campaign. It included map locations from the DCC modules Sailors of the Starless Sea, The Black Goat, Attack of the Frawgs, The Witch of Wydfield and the edge of the Sunken City from Perils of the Sunken City.

Let’s pause a moment and take a look at the map: 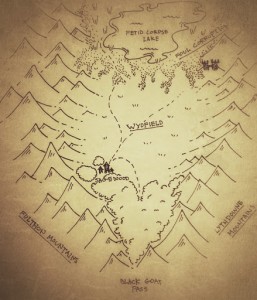 Nestled at the base of Fulthon Mountains, the quiet town of Sagewood provides shelter for 500 simple men and women. The residents make their living from the natural resources in the area: hunting wild game, brewing beer, and trapping gicastors—a new monster described at the end of the adventure. For decades the town’s only claim to fame has been the delicious Dead Goblin Stout, an ale created from the flavorful water of nearby Dead Goblin Lake. Sagewood also has the unfortunate distinction of being the closest human habitation to the Black Corruption, an expansive swath of badlands where few plants or animals flourish and those that do so grow in twisted and mutated ways. Unfortunately for the Sagewood residents, what has flourished in the Black Corruption are mutated amphibious creatures called frawgs.

So now, just for fun I thought I’d publish the maps I’ve been using to keep track off all the locations I’m writing about in my series of modules: 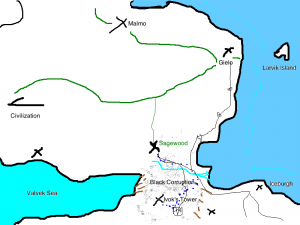 And Draft 2 which I created using Campaign Cartographer with a hex-map add on: 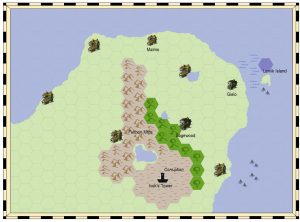 Some new and old locations worth mentioning are described below. I should also take this opportunity to mention I’m thinking of publishing a “campaign guide” when The Lost Tower of Ivok The Mad (aka “Larvik 2”) is released:

Malmo: The Haunting of Larvik Island mentions Malmo (as that’s where the bandits are from) and denizens from there become sub-plot antagonists in Larvik 2.

Sagewood: Where the action starts in Attack of the Frawgs and fully described in Larvik 2 (similar to how Hirot is described in Doom of the Savage Kings or Hommlet in Temple of Elemental Evil)

Black Corruption & Ivok’s Tower: So spoiler alert: The Lost Tower of Ivok the Mad (3/4 written, but probably to be published in 2015 at this pace) is a 3-part adventure: mayhem in Sagewood, mayhem in the Black Corruption, and mayhem as you explore Ivok’s Tower.   Other locations will be mentioned and added to the map as part of that adventure.

So what have we learned with this little “behind the scenes” peek into the module-writing/publishing process?