As I’ve mentioned in a couple of posts, Judge Brandon Goeringer (@SavageGM on Twitter) has been a machine running no less than 7 games over 3 days! That’s a big ‘ol pile of gaming.

Here’s some note’s he sent in about Friday’s session:

Frawgs went great! There was talk of Frawg female genitalia though that was awkward… #dccrpg (SavageGM)

While I have not heard the details, I have a good guess at which point in the module this would’ve happened, which I won’t mention here to avoid spoilers.

Here’s a pic of the player’s from the Friday night session. 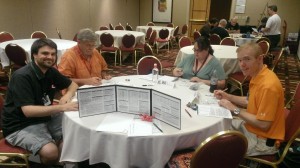 And here’s the comments sent in regarding how Saturday went:

Attack of the Frawgs from @ThickSkullAdv was a huge success at #dragoncon! Brains were dashed on rocks and eyes exploded from clubs! #dccrpg @SavageDM 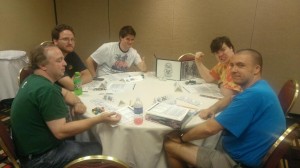 He actually added the following in a series of direct messages to me (which I’ll paraphrase, redact spoilers, and share here as I don’t think he’d mind…)

First session was very fun and they liked Frawgs… lower body count in first session. Second session just finished and they LOVED the adventure… ended up in a literal slip-n-slide chase as the wounded [creature] tried to escape via [adventure location]. Awesome!

One guy said he preferred it to more very dangerous adventures. One character did slip on the [adventure location] and bash his brains out lol! Overall a strong A on the reception!

So once again, I’d like to thank Brandon “@SavageGM” Goeringer for judging Frawgs and the other DCC adventures at Dragon*Con and just being such a great advocate for the game at the cons and on social media, sir. May your Luck score increase by 1!