The Squatch and Dwarven Languages 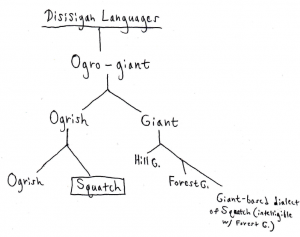 For the last 6 months I was running my alpha playtest for my upcoming adventure “TSA-004”. This new adventure has a couple of new giant-like creatures in it, specifically, Wood Giants and Squatches (more details on that as once I officially announce the adventure and all its deatils, suffice to say, it’s currently in editing phase and will soon enter layout phase…)

Anyway, one of the playtesters is Josh Agee, who just happens to be a linguist by trade. When during the course of the adventure the situation came up where one of the PCs attempted to communicate with a squatch, I made up some quick rules… “Um, yeah, well if any of you guys can speak giant, or ogre, those languages are similar, so do a language check on one of those with a minus two penalty…”

Apparently when you’re a linguist by trade, an obstacle like that becomes an opportunity to flex some of your scientific muscle.

I present to you some of Josh’s work where he does a breakdown of the analysis of the language structures. From Josh’s blog:

I have been playing Dungeons & Dragons (D&D) for some time as an additional hobby of mine, and I have always been interested in the fictional languages that authors or developers fabricate to supplement their fantasy worlds. This is something I have always wanted to work on myself. D&D is curiously absent of any details of the languages used by characters in the D&D world, although references to languages with the same recurring names are constant (e.g. “Common Speech,” “Dwarven,” “Elven,” etc.). I had never seen any truly detailed description of the grammar or phonology of such fictional languages, and not even so much as small sample texts or even traces of single words in D&D. Even Tolkien’s impressive output of such languages did not include any detailed, technical grammar.

So, I wrote a number of short linguistic overviews of the languages that I have encountered with my group in our recent adventures. The goal was to take an approach that I have never seen taken with regard to fictional languages by treating their analyses in a highly scholarly and academic manner, so as to bring the languages to life in a new way: by treating them in the same scientific manner in which modern languages are treated by linguists.

I will most likely be cleaning up and publishing this material as some sort of campaign aid in the future, but seeing as he’s published it to his own blog first I thought I would just share it here.