Not sure exactly where this picture was taken, but apparently Brandon Goeringer (Twitter @SavageGM) has recovered enough from his 3-day/7-game GM session at Dragon*Con to unleash the Attack of the Frawgs at his local FLGS Borderlands Comic and Games in Greenville, SC. 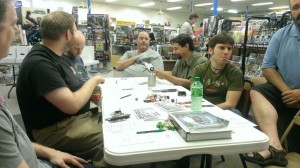 At his current pace, the odds are getting good that he’s actually DM’d this module more times than I have. I think if that happens we will need to recognize him with a 2013 Frawg Spawner Award or something similar.

In all sincerity, thank you Brandon for all your efforts in promoting DCC RPG and my adventures in particular 🙂