Remastering from D&D to DCCRPG 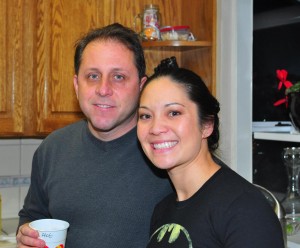 Snake and Cat at the 2012 Christmas Party

So, first of all, I wanted to wish you guys again a Happy New Year. As I’ve mentioned in the previous post, I’m feeling much better from an “emotional health” perspective. It has been nice to be able to clear my mind of some of the personal issues that had clogged my brain and be able to re-focus again on my writing. Very pleasing indeed. Cat and I got a chance to hang out at a post-Christmas Christmas party which is where that lovely photo on the right was taken. See how happy we both look. Her newly married, and me freshly divorced 🙂

How to ReMaster a 4E D&D Adventure to DCC RPG

So, what’s up with the writing, you ask? First off, I’ve pretty much focused much of my writing time in the last month on the Haunting of Larvik Island DCCRPG Remaster. This process has been interesting and fun and I thought I’d give you guys a glimpse into how I’ve been going through the process and my status towards the completion of this project. Here’s the basic breakdown

As an example of how simplified some of the pages become, take a look at the following two screen shots of essentially the same blurb of text from the opening pages – the first graphic is from the published D&D 4E version of Larvik, and the 2nd is an early draft of the DCC RPG style layout to compare how much tighter they become: 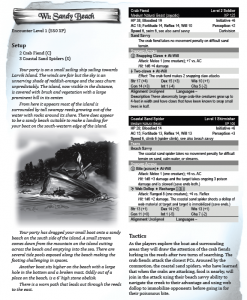 I know what you’re thinking:

“Dude, that’s an unfair comparison! The 4E version has one of Cat’s nice illustrations of a boat, it has fancy text and graphics for the encounter name, and it has 2 monsters, Crab Fiends and Coastal Sand Spiders in the encounter, if the DCC remaster had those things, it would look just as heavy. In fact, I think I like the look of the 4E one better! What do you have to say for yourself?”

Here’s what I have to say:

I digress… anyhow, here’s how the process continues:

So, Larvik 1 had essentially 4 chapters. I’ve finished 2 of the chapters. I’m hoping that I can finish the other two chapters by mid-Feb (as I’m essentially using my “every-other-weekend” to do the writing and then I’ll be sending drafts out to the usual DCC RPG 3pp publishers for proofreading and playtesting.

Thanks again for being patient and I hope you guys have as much fun playing it when it comes out as I’ve had writing it.