Posted by snake on Sep 16, 2012 in Conventions, DCCRPG, Uncategorized | 0 comments

Over the Labor Day weekend here in the US, I went to my first gaming convention:  the conveniently located Pacificon Game Expo  which is held at the Santa Clara Marriott just a few minutes drive from my house. It was a lot of good fun with plenty of vendors selling RPGs, board games, miniatures, accessories, trinkets and art and many tables of games of all sorts going on. 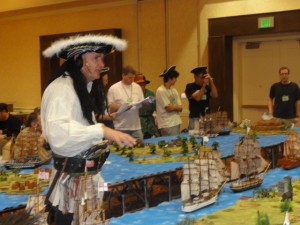 Some scallywags play “Pirates of the Carob Bean Sea” at Pacificon.

The experience of being at the con was interesting on several levels: for starters, the people watching was fabulous, the costumes, the energy all very fun to take part of.

That said, the clear highlight for me, was having the opportunity to play in a couple of Dungeon Crawl Classic RPG (DCCRPG) sessions with the creator of the game himself, Mr. Joseph Goodman. Given that Joseph has been playing for decades—as have I— and publishing his own line of adventures for almost as long(I’m too lazy to look it up, but I’m assuming about 15 years), I was very interested to see what the DM style of someone with his credentials would be.

Before I begin I have a confession to make: I actually don’t play much game, which is to say, I’m rarely a player character. I’m almost always the DM (or “Judge” as it were the DCCRPG parlance, but it will always be DM’ing to me!) so being the player did not necessarily come completely naturally to me.  A point brought home in our second session when Joseph reminded me, “You are playing a Wizard character you know…”

Let me set the stage a bit before I get into what was interesting. The first session, on Saturday, we played a 0-level adventure Him That No Grave Can Keep, (I’d never heard of this adventure) and on the second day we played the already published The 13th Skull, designed for 3-rd level characters.  The first day was interesting in that there were about 10 or 12 people seated around the table as players, and on the 2nd day we had about 6 folks playing one or two PCs each. 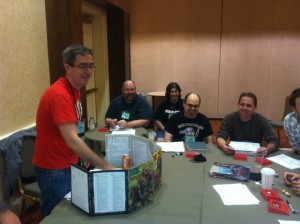 Joseph Goodman prepares to to put us through the 0-level meat-grinder, er, character funnel.

Anyway, here were some of the more interesting highlights for me, interspersed from both game sessions:

Player Backgrounds: The first day had 10 players so there were a lot of dice hitting the table as people rolled up about 3 0-level PCs each. As people would finish others would join in. One of the interesting things Joseph did was have people go around the table and give their character names and backgrounds, and explain how they knew one another. This was also done in the 2nd game where we used pre-rolled characters; we still gave them names and backgrounds and it was a nice way to break the ice with the other players.

Handling So Many Players: as I mentioned that first session had about 10 characters and I thought, “Oh man, this is going to be nuts!”  But Joseph was able to keep the action moving briskly. Joseph employed a couple of tricks to keep the action humming along and everyone engaged:

Monsters: true to the description in the books, the monsters were never named, just described. In 13th skull the antagonist makes swoops in to start the action on an pterodactyl, but Joseph never describes that way. “Swooping in on this large winged lizard thing large enough to carry a man…” and the like. Similarly, the “maggot devils” that spew out of one of the caverns were described in nauseating detail. Never did you hear, “You see a  bone devil before you” or anything similarly pedestrian.

Just Enough Rules and Improvising: I was particularly impressed with how few die-roll checks were actually used. If one of the players had an idea (for example, when we were on the docks I asked, “Is there any fishing nets around? Can I grab one and try to ensnare one of the approaching sea-skeletons with it?” It was all readily handled without die rolls and indeed that sort of thinking was encouraged by Goodman. Other characters were using the dungeon-staple 10’-pole for various tasks and it was just handled. Only when there was some event that might result in damage for failure (“Why, yes, I am going to try to climb this rickety dangerous looking column in the middle of this swiftly moving stream that seems to spew out over a waterfall…”) were some dice rolled.  Searches for secret doors and the like were elaborated on but essentially just handled without dice.

Encouraging DCCRPG uniqueness: DCCRPG has a many fun and unique elements that make it special from other retroclones and Goodman encouraged us to use them all in gameplay. Most prominently was the Mighty Deeds which encouraged the warrior to play with great flourish! (“I want to strike the creature directly in his eyeball!”) Similarly as a wizard, I was encouraged to play my wizard using spellburn (the result of which was my character cutting off his own offering to his patron) followed by the horrible results of the natural 1 leading to corruption. Apparently my patron was not pleased. The creative use of burning Luck and use of the crit and fumble tables also made for really fun game play!

There Will Be Blood: I have an admission to make, dear readers, I sometimes give my PCs the chance to “take a mulligan” when it comes to certain die rolls.  Not at the 0-level funnel of course (as that’s part of the fun!) but sometimes at the higher levels. Goodman, while fair, was not afraid to kill off our PCs and it really did highten the enjoyment even at the higher levels. We did make liberal use of the “bleeding out” rules so there was often a chance to save a fallen foe, but the risk of mortality was very real. One of the guys in our party (a butcher who carried his trusty butcher knife with him) failed some roll while under the compulsion of Him That No Grave Can Keep and was informed: “You pull out your butcher knife, extend your right arm, and cut off your own hand!”. I don’t want to give away any spoilers but the “self-sacrifice” didn’t stop there and it did not end well for that poor PC.

No Maps, No Minifigs: In the first game no map was kept at all. In the 2nd game I tried to keep a map based on what Goodman was describing to us, and he’d reach over and more-or-less correct my layouts. Did I miss them? A bit. I’m a visual person an I like to play with maps & minis in my own game. I’m not a hardcore tactical positioning type DM (unless of course you’re doing combat in 4E and that’s a core part of that type of game). If nothing else, though, it showed that you could play either a 0-level funnel game or a 3rd-level game and still have as much fun without either.  And even not having minifigs he did keep some “attack of opportunity” type situations in the game, (“The skeletons take a swipe at you as they march by holding up the judge…”) 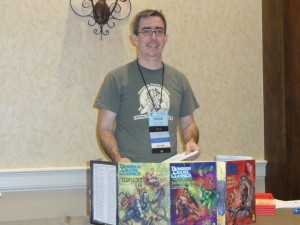 “Epic” modules: This had nothing to do with the DCCRPG gameplay itself but more some advice for me as a third-party pubisher for DCCRPG. I was commenting on how long it’s taking me to write “Larvik 2” and how much backstory/mythology I’d written for that entire module Princes of Kaimai series I’m writing which started with Haunting of Larvik Island, continued in Attack of the Frawgs, and continues next with Larvik 2 (in 2013) and the finale Larvik 3 (probably 2014 given my slow-ass writing.) After some discussion he advised that he limits “background” to no more than 1-page and that if it’s not in front of the players in the parts they read then the players may not enjoy it. We both agreed we’re not 14 anymore and the opportunity to play campaign like adventures are not there anymore.
And while I agree with him… I probably can’t take his advice on this one, but not because it’s not good advice. I’m writing the modules because I love writing and I love gaming. I aspire to write the kind of modules that I enjoyed reading and playing when I was back in my golden age of gaming (e.g., the Desert of Desolation series and Temple of Elemental Evil). May not be the most commercially viable way to write games, and the campaign arc may never be played as I’m hoping they will be… but hopefully there is some 14-year old DM that will be able to play my modules back to back and have it act as a seed for their own campaign world the say the Against the Giants series did for me.

BTW, to see more photos I took of the games at PacifiCon, please take a look at my Google Plus photo album.