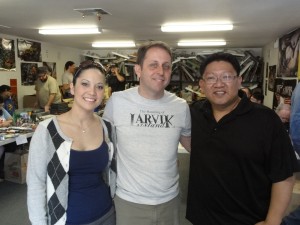 On July 9, 2011, we had the opportunity to do a promotional signing of the new adventure, “The Haunting of Larvik Island” at the Game Kastle in Santa Clara, CA. Game Kastle was holding one of their regular “Flea Market” events where folks come and sell old & new games, minifigs and other goodies; we setup a table to promote the new module. It was a really great experience and a great opportunity to meet with many of the local gaming fans here in San Jose/Santa Clara. It was a fun-filled day as friends, family and new fans came and met with us and learned about what we were doing.

There were several interesting tidbits about the day:

All in all, it was a great opportunity to meet up with many of our family and friends and try to win over some new fans of the module. The feedback was also very encouraging and helps motivate me to get cracking on the second module in the Princes of Kaimai series.
You can check out more of the days photos by checking out our Facebook photo album of the event.