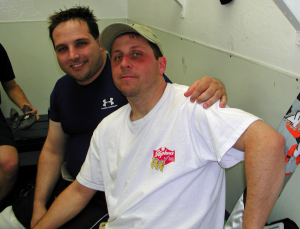 Frezzo and I in the locker room after a game

It is with a heavy heart that I’m going to tell you guys about the passing of one of my very close friends, Mr. Mike Frezzo. I met Mike about 15 years ago when he and several others (including Karen Siegel) joined an ice hockey team I played on. During that time, Frezzo and I have probably played hundreds of games together, enjoyed 3 times as many beers, and had an incalculable amount of laughs. (And, yes, I always called him just “Frezzo” and he referred to me just as “Mr. Snake”).

Frezzo had a great sense of humor and an amazing capacity for generosity. Once we became friends, he was there for all the signifcant events in my life: celebrations, birth of my kids, my divorce, and everything in between. After my divorce, it was Frezzo who playfully reminded me about how my vernacular and love of history wasn’t the most condusive for meeting ladies and would give me “The Big Red X” along with making the appropriate Family Feud you-just-failed buzzing sound. Frezzo would ensure that we always had enough beer, snacks and ice chests during our annual hockey tournaments in Phoenix. He would—and frequently did—offer anything of his own to you that he felt you might get more use out of, indeed, several of my hockey sticks were direct gifts from him. He was always willing to meet me for a beer, a dinner, or entertain my need to go to Whataburger at 11pm at night. 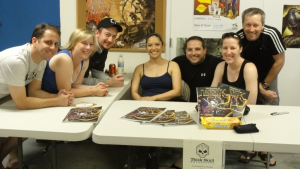 From a Thick Skull Adventures point of view, Mike has been there from the beginning as well, giving me advice on website mainenance and social media. He helped me setup, and indeed, has maintained, the web site you’re reading this very blog on now since the very beginning. He appears in each of my publications as a “Special Thanks” and before he passed gave me permission to use his name as an NPC character as a small way that I can honor him. 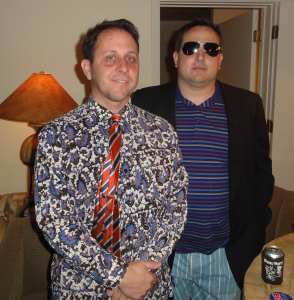 Dressed up for “Formal Night” at one of our hockey parties

About a year ago, when Frezzo told me he’d just been diagnosed with esphogeal cancer, you could hear the understablely anxiousness he had, but it was also countenanced with a resolve that he would fight his disease and fully expected to get “several good years of life” before it was his time. He told me repeatedly that he would fight to the end. As the months went on and he and his doctors tried different medications (none of which slowing the progression of his cancer), never once did I see him show any signs of despondence or depression—only the grim acceptance and bravery I’d come to know from him.

About 8 months ago, he and I went “shopping” for cemetery plots and I was amazed as we visited different areas of the cemetery how composed he would be as we talked about what he think he would enjoy. Even then, when he still had hope for a few more years of life, he was very thoughtful about not wanting his family to be burdened with any difficult tasks and decisions.

I believe I’m not overstepping my bounds when I say, these last few weeks have been particularly hard for those who loved him to watch as the disease ravaged his body in a disturbing visceral manner. And yet, even during these times, Frezzo would meet each of his friends with love and generosity and patience. He literally wanted an open door policy for anyone who wanted to meet him to the very end. A man like Frezzo makes a lot of friends, and for the last several months his blood family, “hockey family”, numerous school friends, and former co-workers would visit him. There has been an incredible amount of love shown for him, and it’s easy to see why.

On Oct 17, my friend passed away peacefully; his unlucky burden finally lifted. Over the next few days there will be stories, anecdotes, and celebrations of his life from literally hunderds of people who’s lives he enriched. And yet, even when those celebrations are past, I know he will still be with us. I will never again be able to go a Sharks game, play ice hockey, have a team party, enjoy a Whataburger, go to a tournament, visit the Taiwan restaurant, or do dozens of other activities without thinking of him. He was the best kind of friend a man can have, and I will miss him forever. 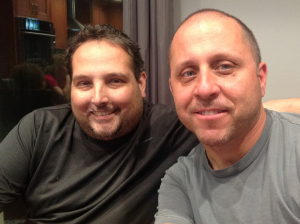 Our last photo together