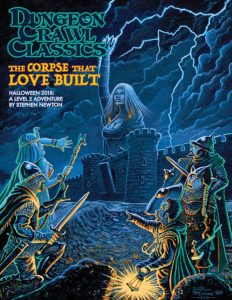 Recently the website Reviews with R’lyeh did a review of The Corpse That Love Built.  (They had previously reviewed They Served Brandolyn Red). I’ve been meaning to do a full “designer diary” write up of the connections, so I’m re-posting my response to R’lyeh here so other readers can learn about the connections between the two adventures if they’re interested.

First of all – thank you so much for reviewing The Corpse That Love Built and They Served Brandolyn Red. I always appreciate people taking the time to read and review my adventures, so again, thank you.

In your review you’d mention that there weren’t many connections between Brandolyn and Corpse. I wanted to give you a bit of a “behind the scenes” of the making of Corpse as I think it might explain a bit about how Corpse was designed. About a year after Brandolyn was published I wrote to Joseph Goodman and said, “Hey, do you folks ever publish sequels? I have an idea for a Brandolyn sequel, here it is…”   The feedback I received was (essentially), “No, we don’t do sequels, but that’s a great story idea, so write that, and don’t call it a sequel.”

So I essentially wrote Corpse and hid the “sequel-y-ness” as Easter Eggs in the adventure. Sharp eyed readers of Brandolyn pick up on them, but it was never marketed as a sequel and I’ve always called it “a spiritual sequel” in my blog posts. But now that some time has passed (and I had an opportunity to go back and re-edit bits for Brandolyn when they re-printed it earlier this year), I’m making the connections a bit tighter.

So that said, here’s some of the connections. Filthy spoilers ahead…

But now… the Big Stuff:

As we fast forward into Corpse, we can read the good doctor’s notes. The notes are all about his experiments with resurrection. At first he experiments with animals of longevity (the tortoise, the tapeworms, the halfling-handed-luck-lizard), before he moves on to experimenting with un-dead (the DaLacey Twins), before finally realizing he can actually perfect resurrection through a combination of using giant body parts and powering a soul using the Mithral Coil. But who is he resurrecting?

Brandolyn Vintner, of course! He has been nefariously collecting her body parts over the years to perfect his resurrection ritual. She is never explicitly named in Corpse, but of course The Bride is the resurrected Brandolyn (namesake of Brandolyn Red). Savagely murdered in the wine press by her insanely jealous husband, she has been brought back to life 300 years after her human death by her secret elven lover. 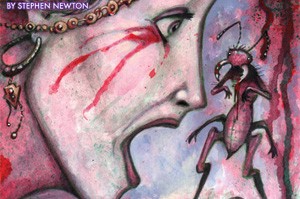 When I originally wrote Brandolyn (and Corpse), I wanted to do something playful with the concept that Elves had such a much longer life span than humans. It made me think, how does that affect he attitudes of (relatively) short-lived humans? What if they wanted to marry? Is there racial prejudice?

In Corpse I wondered, “How would Brandolyn feel about being resurrected 300 years later?) In Brandolyn Red, she’s a tragic victim, in Corpse I wanted her to be a kick-ass foe pissed off that meddling PCs are once again getting in the way of her relationship with Lotrin.

So anyway – there’s your connections!

I could write a whole other article about the connections in Corpse to the novel Frankenstein. I will leave this one tidbit though: all the “doctor’s journals” left by Lotrin were re-written by me right before publication to use the verbs and sentence flow that Mary Shelley used in the novel. I even went through and made sure (as much as possible) that I only used expressions she used in her novel.  There’s lots of other connections with character names.