So, as I mentioned a couple of weeks ago, I read that our beloved Attack of the Frawgs was going to be played at ConNooga 2013. I’ve since been in touch with the judge/DM that ran the adventure, Mr. Kim Swanson. He has been kind enough to provide me a couple of highlights from their session:

had seven players! and six of them had never played dungeon crawl classics before!! the sailor swam. the healer saved who he could. the grave digger dug plots for those he couldn’t. the squire bravely led the charge. the barrister kept chucking her crow bar at monsters when not making coffee. the halfling tailor was fabulous. the farmer fell but his pitchfork was quickly nabbed for provisional needs. 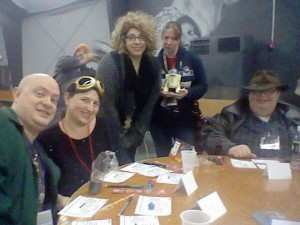 Ah, reading this and it really does remind me how much I enjoy The Funnel. I know a lot of print has been dedicated around that 0-level character churn, but I do think it’s one of the best parts of the Dungeon Crawl Classics RPG game! A handful of other quotes from Kim that I’d like to share:

And he added the following on how the happy characters met their demises. Warning… Attack of the Frawgs Spoilers ahead:

how i killed some of the characters, the barrister used a crowbar on the padlock of the water wheel house and when she rolled a natural 20, i had it burst open with such force it hit the lowest luck character in the group for 1 pt of damage. which was a killing blow

after the hunter failed to climb up to the 70′ foot up platform, a farmer tried?!? and fell to his death.

the party dubbed the insane guy from the water wheel “old man jenkins” and it stuck as they were shouting victory songs, quickly forgetting he actually managed to hammer one of them to death.

one of those gicastors got our brave squire, which was only a matter of time since he kept leading the charge.

and the frawg queen killed the barrister in the last epic fight. i gave the barrister an extra round before that as she did the alien queen move and removed her egg sackiness and then proceded to charge.

there were about this many more almost deaths but we had a healer in the party which i felt should give him a chance at rolling under his luck to save those at 0 hit points. got to give a chance in the spotlight!

i love how it has the classic cave behind the waterfall.

and everyone expected to get jumped, but the first thing they fought was old man jenkins which was after the fork in the road, and after the tree stand, so it was nice that they got to meander as a group and get their roleplay on before the action started. 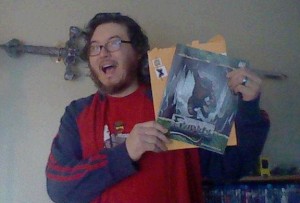 Anyway, it sounds like a good time was had by all and I’m really happy Kim was able to bring some DCCRPG goodness to the fine folks in Tennessee. I sent him a fresh signed copy of Frawgs so that he could continue to spread the good work at his FLGS and other conventions.

If any of you readers out there ever want to DM frawgs in your own town, please drop me a line and I’ll promote on my side as much as I can.