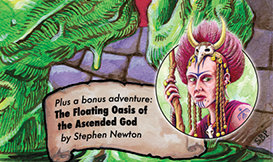 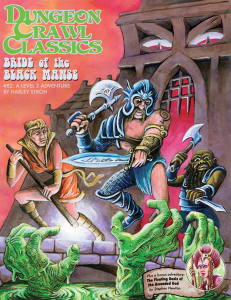 With all the photos, merriment, and high-profile Kickstarter announcements that were made during GaryCon 2017, a couple of projects that I contributed to may have gone under the radar.

Floating Oasis of the Ascended God

In this first level adventure, the players travel to the mysterious Floating Oasis where they must navigate the perilous cloud-caverns while facing off against a dangerously-indifferent deity.

Floating Oasis of the Ascended God is a new mini-adventure I’ve written which has been included in the reprint of Harley Stroh’s DCC#82: Bride of the Black Manse.  It’s a tidy little adventure for 1st-level players which can be completed in one session. I had a fun time playtesting this with Game Kastle regulars as well as friends and family. 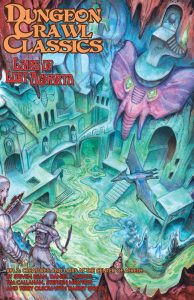 Also announced was DCC #91.2: Lairs of Lost Agharta which includes 3 entries I contributed. This is an add-on for Harley Stroh’s fabulous DCC #91 Journey to the Center of Aereth. If you have not checked this adventure out, you owe it to yourself to pick it up. It’s no surprise I’m a huge fan of Harley’s, but I honestly believe that Journey to the Center of Aereth may be his equivalent to the Drow series. Regardless, I’m pleased that I was able to contribute some material to Lairs along with fellow DCC authors Steven Bean, Daniel J. Bishop, Tim Callahan, Terry Olson, and (of course), Harley Stroh.