Wanted to draw your attention the recently announced Kickstarter for the Goodman Games module The Chained Coffin by Michael Curtis. Basically the module is coming out either way, but depending on the Kickstarter, you’ll get a really interesting “feely” (as they used to call such things back in the Infocom days).

You can read/listen all about it here: Chained Coffin Kickstarter 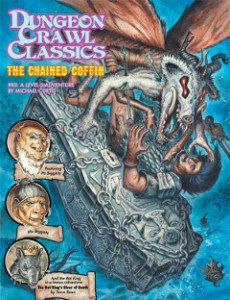 The Chained Coffin by Michael Curtis

Reason I’m mentioning here, is this is one of the adventures I actually did playtesting for a few months back. Without giving away any spoilers, I will say that it was an interesting adventure that mostly takes place in a mountainous region that (according to some podcasts I’ve heard) was inspired by Appalachian Mountain legends. It does have a very big finish and some fun and interesting “NPCs”. I won’t say more there, aside from our group managed at least 3 really fun-filled sessions out of the module.