As you all hopefully know, I’ve been busy over the last few months remastering The Haunting of Larvik Island to DCC RPG. As I talked about here it has been a multi-step process. One of the tenets of making this a “remaster” vs. a “conversion” as I didn’t just want to convert the text blocks, I wanted it be DCC RPG native from the ground up. In fact, it is probably more accurate to say that this has been a “re-write” of the adventure as the time I’ve spent catering to this module exceeds even that that I worked on for Attack of the Frawgs.

But today, we’re talking about Maps! For the 4E version of Larvik I’d created all the maps myself using Campaign Cartographer 3. And even though I’d received some nice reviews for the maps, I was never totally happy with them. Any success I had at all with them were due to Campaign Cartographer being such a powerful tool and Joe Sweeney’s fabulous video tutorials on YouTube.

One of best parts about working on DCC RPG has been the fabulous community of third-party publishers, writers, bloggers, artists, gamers, fans that have all been wonderful in terms of providing feedback and assistance. One of the gents I’d been following is +Jeffrey Tadlock who runs The Iron Tavern blog. As a regular reader to his blog I’ve always admired the maps he does for 5-minute map Fridays and what not. I especially liked the “retro” feel of his maps–hand drawn, and yet distinctly old-school in feel (in fact it was one of his maps that has inspired me to start working on The  Yet UnAnnounced Secret Project which has been a load of fun to write… but more on that later…)

I reached out to Jeffrey to see he’d like to be part of the Thick Skull Adventure experience and I was lucky enough he agreed to come on board.

So as a teaser, I’d like to give one sample of a “before and after” of how the maps are shaping up.

For your amusement I offer 2 maps of the ruins area:

Map 1: The Ruins as it originally appeared in Larvik 4E:

And now, how they’re shaping up for Haunting of Larvik Island DCC: 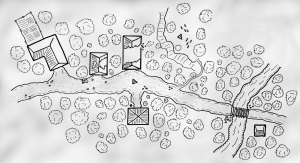 Now, this is not the final version of the map (there’s still a few more flourishes to put in) but you can already see how much nicer the image will become. In addition to map becoming B&W (which I know will help how they look in the printed version… the color maps looked OK in PDF but the contrast came out poor in the print version of the module) I think the new maps have a great old-school feel which will hopefully help keep the judges and player’s immersed in the game play.

Anyway, wanted to go public with this exciting news about Jeffrey’s contribution. I’ve got 2 different groups currently playtesting the adventure (not including my own playtesting) so I believe we’re on track to a June publish date.