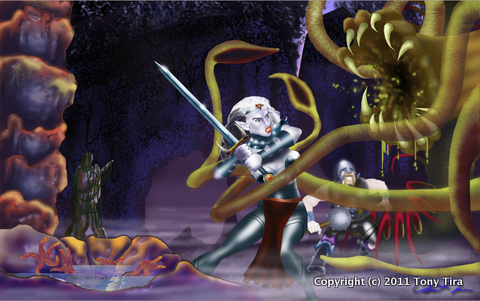 So, there’s been a good amount of progress on the module in the last couple of weeks, here’s the breakdown for the faithful readers as well as formally introduce some of other module collaborators:

Where does that leave us? As my kids are currently on winter break, I won’t have a chance to do any playtesting this week. I hope to finish the playtesting by Friday, Mar 11, and then work the next week or two with Catherine to finish any last minute edits that come from that playtesting. I have done some research on printers, but will request the final project quotes at that time for printing the module. Once printed, I will hand over to my game distributor whom I’ve already worked out a distribution agreement with.

I will then probably take over the file from Catherine to do some tweaking to optimize the module as a .pdf file for those who prefer to play that way (creating project bookmarks, links, optimize for color .pdf vs. printing in B&W, etc.) so the adventure as a .pdf should be available shortly (a few weeks? a month or two at most?) after I complete the printing process of the project.

I’d like to thank everyone involved so far, including my new Twitter friends who have been working the project with me and providing feedback.