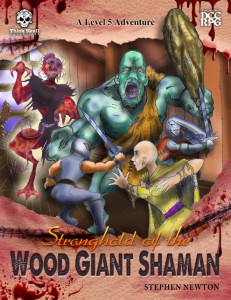 These are not your father’s giants…

Stronghold of the Wood Giant Shaman is a DCC RPG adventure designed for 4 to 6 5th-level characters. It was lovingly written as homage to a beloved classic RPG adventure module; crafted in a similar tone to some older adventures of yore, but spiced up with a distinct DCC RPG flavor.

Judges will find a trove of goodies inside the adventure including:

Print version: Coming Oct 2014 to a game store near you!

This product is compatible with the Dungeon Crawl Classics Role Playing Game.