Haunting of Larvik Island to appear at Gam3Day (San Diego)

Word on the street is that Judge Mario will be bringing The Haunting of Larvik Island to Gam3Day in San Diego on Nov 10, 2013. Judge Mario, as you all remember, has been a prolific judge running a ton of events in San Diego (Gam3rDay, Game Empire). 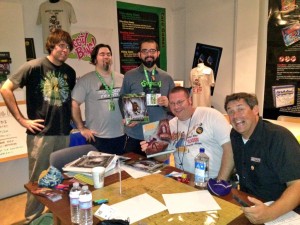 Photo of R.S Tilton (2nd from left) and Judge Mario (in beard in th center) from Gam3rCon 2013

I haven’t seen an official announcement on the Gam3rCon website yet, but I was contacted by Judge Mario that he’d be running and saw a post on R.S. Tilton’s blog (both of whom are San Diego DCC community favorites) so that’s firm enough for me 🙂

Update: here’s info direct from Judge Mario (aka Hrevelax on the Goodman Games Forums). The idea of him using some of the custom Crawl PC classes should be reason enough to go. Paladins!

Hello again everyone. Gam3rcon is having monthly public games of all kinds at the 10th Avenue theater in downtown San Diego!

I ran The infamous Tomb of Horror Gam3day October and it went great. Now this time around, I’m going to run Thickskull game’s Haunting of Larvik Island. I will have pregens ready and I will be using alternative classes from CRAWL! #6 because I think those are hella cool.

There is a $5 cover charge to this event. DCC wont be the only game available, and the actual event is from 12pm to 9pm. They have a ton of awesome boardgames, video games, and RPG demos for people to check out and there will also be snacks and food for sale.