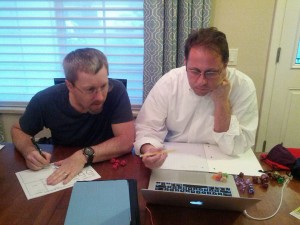 Last night we officially kicked off the playtesting of Haunting of Larvik Island DCC! Playtesters include Cat Harkins-DiNardo (Think Skull Adventure’s fine graphic designer who’s getting behind the dice!) Devin DiNardo (Thick Skull Adventure’s web designer), Sarah Bunker, John Bunker (pictured on left with me) and Karen Siegel. All of these fine folks are also on my hockey team and this is the first time they’ve helped me with playtesting. (They played Attack of the Frawgs, but only after it was published.) Each player controlled 2 PCs (the survivors of their Frawgs adventures) so I had to scale up 2 encounters as I originally designed 6-8 PCs: but even this will be helpful as I will write (to scale this encounter, add 1 more critter here…)

I’ve talked about the value of playtesting before so you know I’m passionate about it but I really have to tell you aspiring RPG writers & designers: do it! Do it again, if you can! Have someone else doe it for you! You catch so many errors and design flaws and things that just don’t work nearly as well as you thought they would when you first wrote them. Just last night I re-designed a monster on the fly not liking how it looked once I got it in front of the PCs.

I’m a week-long business trip next week but hopefully we’ll have playtesting finished by the end of May for a June publishing.